Where to Fish in NZ

Where to Fish in NZ

Where to fish in New Zealand

The first and most important thing to understand about the fishing in New Zealand is that it is not “owned” by individuals. So anyone can fish just about every river whenever they want. You would have thought this might be a recipe for chaos and overcrowding but there are very few New Zealanders (and tourists) and yet there are many, many rivers! The South Island (population ½ million) is the size of England and most of Scotland (population 60 million). So fishing pressure is minimal compared to the UK.

Remember though that no-one can sell or buy “exclusive” fishing. Ignore the big tour companies that offer “exclusive” fishing in NZ – they are lying! Often the best tactic is to go deep into the wilderness/mountains and you are unlikely to ever see another angler (the trout there don’t see any anglers either) but privacy can not be guaranteed. Even if you have hired a helicopter and landed beside the best and remotest, trout river, another chopper could arrive and deposit a party of anglers in front of you. It has never happened to me but it is possible. That’s one reason why guides with local knowledge are vital.

Unlike Agencies or Groups I don’t recommend staying in just the one place and I have no firm links with any venue, any guide or any hotel. Anyone going as far as NZ should see as much as they can. 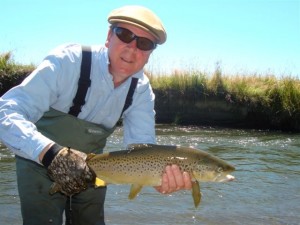 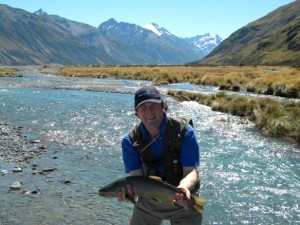 It’s incredibly hard, and almost inappropriate, to simplify New Zealand into this brief paper. With no wish to belittle the North Island in any way I will concentrate on South Island because while the North has many of the attributes and possibly even a few advantages – further North = warmer – there is even more variety on the South Island, which would takes weeks to see properly itself.

I reiterate there is so much variety on the South Island that it’s ridiculous to simplify it into just three zones but very broadly one can say that the North and West Coasts are mainly forested and mountainous – except compared to the next zone, these are only hills! There are countless rivers on the North and West, some large and some small, and the forestry in the North is more likely to have been planted, while on the West Coast its usually native bush. This zone is wetter than elsewhere but fishermen experience less wind because its sheltered by trees and hills.

The central zone of the South Island is Mountains, big Mountains, even the small ones are twice the height of Ben Nevis and the biggest (Mount Cook) goes over 12,000ft. There’s snow all year, and glaciers, up there, but there are passes and river basins in this central zone, which are excellent for wilderness river fishing. There are rivers, lakes and streams and the scenery is truly magnificent.

The final zone is the East coast and South, this is mainly agricultural and in some places is dead flat (the Canterbury plains) while in other places is rolling hills, similar to Scotland. It can be very dry, but irrigation is booming in farming areas. There are lots and lots of rivers flowing from the Mountains and several lakes act as water supplies. Trout fishing can be very productive here – there are even a few pacific salmon. This is where most fishing is done.

So where does one start? Well the normal arrival airport for International travellers is Christchurch and if coming from Europe, people may have travelled 30+ hours to get there. So I suggest not going too far from there at first. Also by basing oneself in the central (south Canterbury) part of the Island you can experience all 3 zones relatively easily from there if, and when, you wish.

If you had to miss out one of these zones (and I wouldn’t recommend it but time is always too short) I would omit the N/W Coasts. The fishing in the South/East is so superb and the scenery in the Mountains is just amazing, but from a base in Central/South Canterbury you can get to all 3.

An example of a suggested fishing itinerary

The upper Rakaia has only a limited amount of fishing but the settings are magnificent so a stay there for a couple of nights early in the holiday is well worth it. I can arrange “ordinary” (3 star) accommodation and then at either side there are some “huts” (1 star) as well as a hunting lodge (4 star). I will arrange for transport from Christchurch (2 hours by car or 20 mins by air).
That’s something to say here: in NZ they fly a lot, by helicopter or small fixed wings. The train service is appalling but buses are quite good. Cars are the norm. If you are prepared to pay for a helicopter for example, you can fly to many more streams around the Rakaia in 20 mins or so. I can arrange car hire or I can transport people personally from Christchurch airport.

After a short stay of 2 or 3 nights in this Mountain pass, I recommend heading down to Waitaki/ Otago.Again all levels of accommodation are available from the ordinary house/cottage to a smart (hunting) lodge. “Hunting” in NZ means stalking – they go for deer, or very wild goats called Thar or Chamois – and as its seasonal, I’ve done deals with hunting lodge operators to allow fishermen to visit when the lodges are not too busy. As they normally cater for rich Americans the quality is quite good but they will have mainly deer’s heads on their walls not pictures of trout, or stuffed salmon. To get pure fishing lodges you must go North and I have visited (can arrange) several up there where there rod rooms rather than guns rooms – maybe they also allow hunters in their winters!

There is a huge amount of varied fishing around the Waitaki valley. I suspect most people will come to fish for trout in rivers so I don’t push the huge lakes and the salmon at the river mouths. But all these vast lakes (many man made) of Tekapo, Pukaki, Ohau, Benmore, Aviemore and Waitaki itself have countless rivers running in and out of them. Trout abound. Both wild rainbows and browns and in some rivers they can be huge – over 10lbs – while mostly they will be 4lbs to 5lbs.

From these two bases – Waitaki and Rakaia – we can assess where else for you to visit if any. You could go further south to the farming area of Southland where there are some amazingly productive streams/rivers such as the Mataura on which the town of Gore has the self proclaimed boast of “world capital of Brown trout fishing”! Its hard to dispute because its full of fish that river, but they are not huge (averaging 2lbs). Its well worth a visit though, as are the 30 or so rivers around it! Or you could go over to that wetter West coast and fish there for a day or 2. Which river would depend on how you are travelling – helicopter would allow you to fish more obscure rivers while others such as river La Fontaine are close to the road.

I haven’t even mentioned some more of the variety of South Island… such as Fiordland in the extreme south west, or the Marlborough Sounds of the north west. Or the Mackenzie “desert” in the centre (which now with the help of irrigation, is hardly a desert) or the Catlins, or Dunedin or the vineyards or the fruit farms, the skiing resorts (Queenstown is world famous) or coastal activities such as Whale watching in …. or rafting or mountaineering or…