SalmonSchools 2014 – Kirkwood
Our 9th year of the SalmonSchools and a poor year for salmon throughout Scotland, the UK, Ireland,
Norway – indeed just about everywhere lacked salmon in 2014. Added to that, before the first week
of October, we experienced a severe drought on the river Annan but our first school was in that first
week of October so naturally we had floods – we always do!
The “Advanced” school – which we are calling the “Improver School” from now on – was the first
at which Lee Cummings had helped Mark and Anthony. He was good, adding some brilliant casting
instructions of various types and some useful equipment tips. Two fish were caught in this school –
by Leslie Boswell and Martin Wilshire which constituted a good success. Sadly no fish were
caught at the “ladies only” school at the end of the week but casting instructress Ally Bremner made
lots of friends, indeed many people made lots of friends and some really great casting too. The
third new member of the SalmonSchool team was cook Sue Ingham who by the end of the week
had done herself proud and achieved high acclaim.
For a fuller account of each school, we will send a page to each participant along with some photos
and links to find more photos.
In early November we ran two “skills schools”….the first team were a great crew who patiently
accepted that the river was in flood. Lee Cummings got them casting well but it really was a wet
four days and only a few fish were being seen. The team for the second half of week were equally
tolerant of the heavy and constant rain and hence the high water levels. Just as it looked as though
we might blank the week, Brian Glover caught a 4lbs salmon at about 4pm on the Saturday
afternoon. Phew, but as everyone kept saying… “it cant be helped if we dont catch fish at least we
are learning lots and perfecting our casting for when conditions are good”. One of these years we
will get good conditions, possibly even perfect conditions… maybe it will be 2015!
Les Boswell, then Martin Wilshire
were successful in October………
and on the last day of the Skills School it was Brian Glover who won!
It might be argued that the “Ladies”
were far more photogenic though!
Hope to see many people again in
2015 – our 10th year!
www.SalmonSchool.com 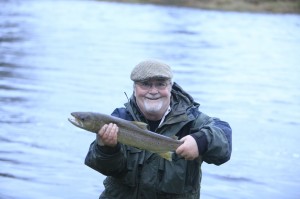 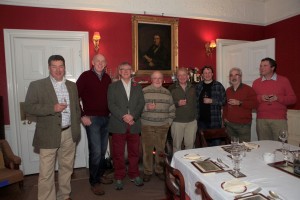 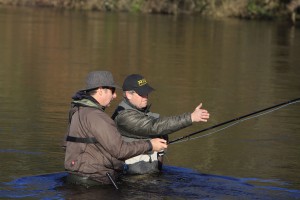