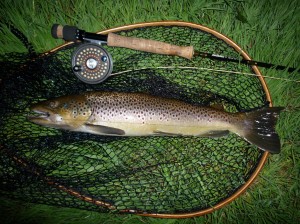 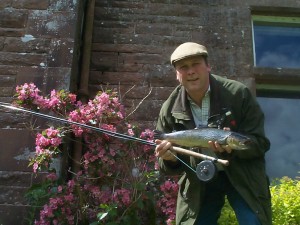 Some people say that true sea trout fishermen must be maniacs….. at the very least insomniacs, because to fish for them properly you need to fly fish through the night in the pitch dark. It’s lonely (some people say scary!), but a perfect escape from the busy world and it’s also totally exhilarating.  Before you catch a sea trout there are the nocturnal noises and movements of herons, otters, foxes, badgers, bats, owls and even the fish themselves sploshing around. When you hook into a sea trout it’s madness as they take off around the pool, inevitably jumping frequently, and fighting like hell for 10 or 15 minutes – all in the dark! It’s the ultimate test of a fly fisherman. It’s not for novices.

For sea trout the Annan is one of the top rivers in Britain.  Official figures back up this claim – regularly in the top 3 of numbers caught – and show our sea trout have an average weight of around 2lbs.

Scotland’s sea trout population goes up and down in cycles. The species was decimated during 1990-1993.  After that numbers recovered on the Annan to a very healthy level for 6 or 7 years – over 3,000 sea trout were caught by rods on the Annan in the year 1998.  At this time (the late 90’s and early 00’s),  the Annan (Kirkwood and Jardine Hall in particular) hosted the National Sea Trout Festival and the National Sea Trout Challenge each year.  The fishing was excellent.  Sadly, from the early 00’s, there has been another downturn in numbers, although there are encouraging signs in the last couple of seasons… we might be back on the up-cycle again.  June and July are the best months, although the first ones arrive in late April and they go on running into the Autumn.  The further up the river (eg Jardine Hall) the better it is later eg August but when it’s cold at night the fishing becomes harder.

You can catch them by daylight but most are caught at night because they tend to move and feed at night. They often push up into a pool just as it’s getting dark and Annan sea trout do feed – yes – unlike sea trout in some regions like Wales.  In a good night you will catch 4 or 5 and it is the most exciting of sports.  The popular flies are teal blue and silver, invicta, black pannel, and butcher although some lures are used and in low water, dry flies (pheasant tail) are successful, mainly in the evenings, just as it gets dark.  Surface flies/lures are used on very dark nights and you need a floating line mainly but you could switch to sinking (or intermediate) lines in the dead of night. Chest waders are almost essential at Kirkwood which is a renowned sea trout beat but you can get away with thigh waders at Jardine Hall which is also a wonderful sea trout beat. It’s just very lightly fished. Pity.